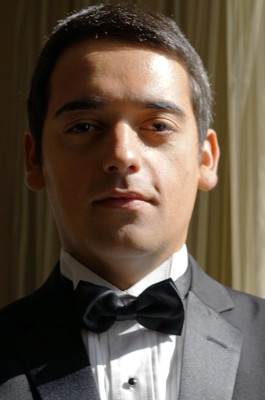 Born in Oliveto Citra (Salerno), Italy, September 6,  1986. Before Maybe director devoted four years to painting and journalism. At age 11 he won the National     Painting Contest Extemporaneous. At 15, his first short film, “The Monaco”. In 2004, his first film, “Life, Love and Destiny” which, completed in 2006, is presented to the Diffuse Museum of Turin thanks to the Turin Piedmont Film Commission, Submitted in the Encyclopedia of Cinema in Piedmont and receives a letter of     congratulations from family Rossellini.Nel 2007 he released “I Paint the Sun”, short for social ASL Salerno. In 2008 it was the turn of “Checkmate”, pulp Italian record of visits on the web. In 2011 presents his first book at the “Salone Internazionale del Libro Di Torino” and the same work turns on 35mm film of the prequel “The Director Of The World” with an international cast, winning 44 awards in the world and participating in the 65th Festival De Cannes ilregistadelmondo.com. President of the Italian Movie Group, artistic director and founder of the Italian Movie Award now in its 7th edition with guests such as: Michele Placido, Carol Alt, Valentina Lodovini, Gianmarco Tognazzi, Alessandro Siani, Luca Argentero,  Edoardo Leo,  Giulia Michelini, Cristiana Capotondi,  Masimo Boldi, Marco D’Amore, Salvatore Misticone, Edoardo De Angelis, Luca Abete, Mrs. Matilda Raffa Cuomo, Rocco Papaleo, Don Luigi Merola, Sergio Rubini, Luca Ward, Mariasole Tognazzi, Chiara Francini,  Alessio Boni, Paolo Genovese,  Edoardo De Angelis, Antonio Giordano,  Maurizio Casagrande, Biaigo Izzo, Sindey Sibilia, Pietro De Silva, Valerio Caprara. Plays football for charity in the National Artists TV. From 6 years he receives Bronze Medals of “President” of the “Senate” and “House of Representatives” for the social issues of the Italian Movie Award. From 2014 appointed artistic director , the international festival of short youth “Youfilmaker”, and president of the jury at Llapi Film Fest in Kosovo. Turn two commercials: “Land Of Fires” with Dr. prof. Antonio Giordano; “Stop The Bully” for the social campaign on bullying of Mentoring USA-Italy (broadcast on Rai, Mediaset, La7). In 2015 he made two web series and is in pre-production for a feature film on the topic global environmental pollution.

To write to the President and Artistic Director Carlo Fumo

“I organize the Italian Movie Award © since 2009 with the intention of making films and culture, through social issues that each year are represented in the movie in competition. The festival has achieved extraordinary results coming to 78,000 admissions in six years and 38 days of festival, only 29,000 last year. The festival is organized non-profit organization, with the hard work and passion of dozens of young volunteers. From 1st edition, has not received any financial support from public authorities, but is supported 100% private and we are all proud to not weigh on citizens, because convinced that to do in a free culture, that culture must also become firm . I have always believed in the future, I believe it means to believe in the young, give them opportunities, trust, make them grow. Too often, unfortunately, with the excuse of youth, education and opportunities, they find themselves exploited, and demoralized by a system that does not believe in their ideas, creativity and meritocracy. Our best young people are forced to emigrate, leaving a generation gap for the economy and the growth of an entire country. With the support of La Cartiera shopping center of Pompeii (our main supporter and host structure the entire village of the festival), we gave the opportunity to many young people believe in the future, to train them, follow them, help them and in some cases find them work, in the world that they love and dream, the Cinema. In the 7th edition of the real “engine” of our own, but most of your festival, will again be the cinema training “Italian Movie MasterClass ©”, became a meeting and discussion of the most important in Italy. Also this year, the MasterClass, unlike many speculations present in other realities, will be completely Free for 100 young people from all over Italy. Make announcements it is easy, but do the facts is quite another. The talent and creativity are the greatest guarantee to a better future, innovative, and these skills are not to be feared or exploited, but rather enhanced. “